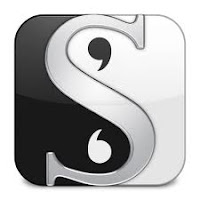 I love Scrivener.  I don't think I'm the only person to say this, and I suspect my statement is by no means the most immoderate statement of love they've received.

So, what is 'Scrivener', exactly?  It is, in my opinion, the most useful creative writing system to come along since word processing began.  It enables a novelist, like me, to write a book in my usual willy-nilly fashion with an outline.  Chapters are conceived of and composed, not always in sequence, and they are inserted in the point of the manuscript where they most likely appear.

My stories tend to come in fits and starts.  I have an idea, I toy with it, have an overarching notion of what is happening and why - not set in stone, though.  I write scenes and insert them in my manuscript (which is generally a Word document).  After a while I have a long line of text and it gets unwieldy, at which point I split it into two separate documents under a file name ('Mourningtide', for example).

Here's a page from a manuscript I'm working on.  This is now in Scrivener, but here's the Word draft: 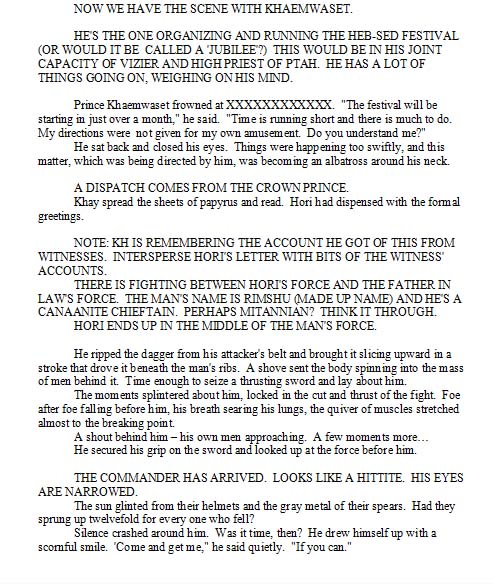 This blip has the potential for three chapters in it. The first being Khay setting things up for the jubilee. Two more chapters might involve Hori's battles. They'd have to be split up, inserted. Cut and paste work.

Scrivener lets me do that, sort of.
Here's a chapter in my manuscript for MOURNINGTIDE: 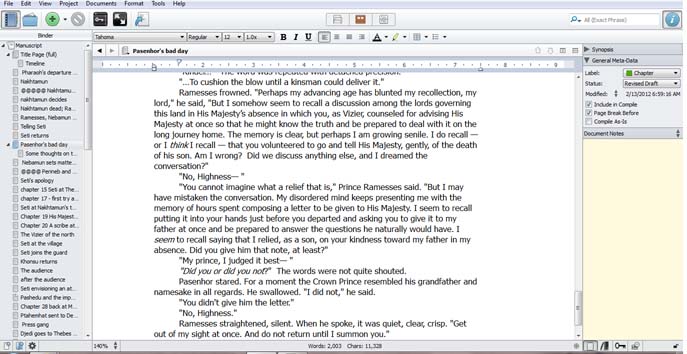 The center section has the chapter itself.  And you can see from the list on the left (of chapters) that this is fairly early in the story.

That column (on the left) has all the chapters of the novel in the order in which I have put them.  Here it is, in part (I have a lot of chapters):

I've given the chapters informal names to help me to know what they are.  In the finished manuscript they will be numbered with, maybe, a notation as to where they are (the action in the story takes place in three locations).  Or not.

If I decide that I want a chapter to come before one above it, I click on the chapter's name and drag it up in the list.

As the manuscript grows in size, the list itself can become cumbersome.  If I am working on a chapter that takes place near the end of the story and I want to double-check something that occurs near the beginning, it can get to be troublesome to scroll all the way up and locate the chapter.


Scrivener has taken care of that matter by inventing something called the 'corkboard': 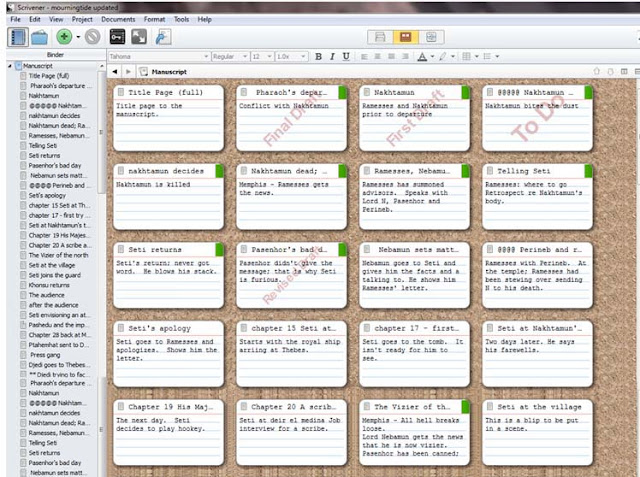 ...And here it is.  Each square (they look to me like index cards) is a chapter.  You can label the chapters as final drafts, needing work, whatever.

One last feature that I find particularly useful is the split screen.  Recently, I was working on a chapter that referred directly back to something that happened near the beginning of the story.  I didn't want to open two pages and go back and forth.  Scrivener allows you to split the screen:

You can check back and forth between the scenes to make sure your facts are straight.  (I had some dates wrong in one of my chapters; this feature helped me to adjust things.)


...and when you're ready to produce a full-fledged manuscript, there's a command that puts things together in order, formatted, as a .doc. 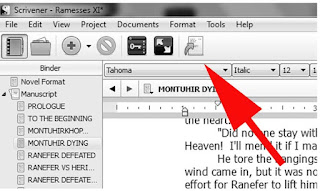 This is the 'Compile' command.  When you use it, it will show you a list of the pages you have.  You select the ones you want to put together, and whether you want 'hard page' breaks. 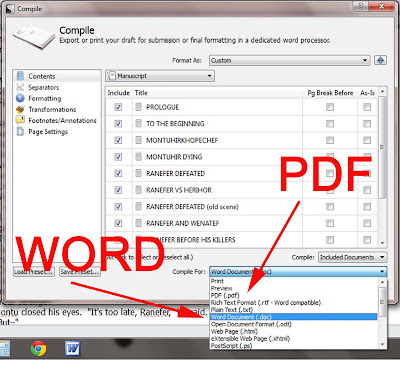 You then can choose from a drop-down box the way you wish to save the manuscript.  I save mine as .doc, which, being such, MSWord can work with.

They have places for research, for images, for character notes (and some nice templates that help organize your thoughts).  And the program is $40 US.

What's the downside?  Well, you don't get a CD.  It's download only.  I've downloaded the program to two computers (my laptop was stolen).  Scrivener folks were charming about restoring my program.  I suspect I could upload it to every computer in my house.

Support is charming and the product is very, very good.  I can't recommend it highly enough.

If you're interested, the company is Literature and Latte.  Scrivener is available for Mac and for Windows.

And If I'm ever anywhere near them, geographically, I'll drop in with hot chocolate for all.  And maybe some Bakewell tarts...