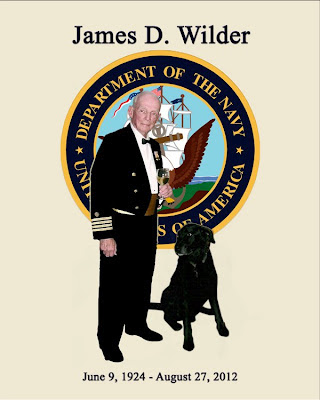 I'm not sure when I realized how lucky I was.  I think maybe I just assumed that everyone had parents like mine - stern when they had to be, always kind, straight-shooters  when it came to right and wrong, but who liked to laugh.  Maybe it was when I entered my early teens and saw other parents that were not like mine, that got me started thinking.

Dad was in the United States Navy.  He entered the (very new) Radar program in World War II and was a radar officer in the Pacific theater of that war.  He left the Navy after the war and attended law school on the GI Bill before he was called up for the Korean War in 1950 (right after marrying my mother).  He went back to war and stayed in the Navy for nearly thirty years, retiring as a Captain and the Judge Advocate General of the Fourth Naval District.

Dad went into civilian law practice and finally retired for good around 1996.

We lived all over the place, from Newport (RI) to Aiea Heights (Hawaii) and a few places in between.  We were always piling into the car and going for drives, to museums ('You have to understand, Diana - admission on Sunday mornings was generally free...)

Health care is free to Military dependants - or it was when I was growing up - but while Mom and Dad had their children to the the local military dispensary for their inoculations, the first thing they did when they went to a new location was to look up the finest pediatrician in the area and take us kids there.

Children grow up, and so did I.  My Dad (and Mom) somehow made the cross-over from Respected Parent to Greatly Enjoyed Friend.

Dad lived to be 88 years old and he died this past Monday.  His family was close by.  I will miss him. 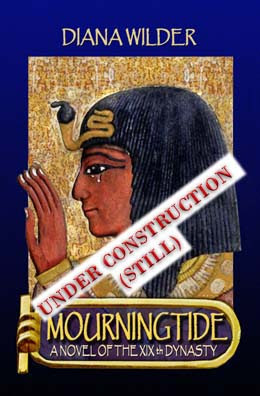 So... Manuscript is at nearly 90K words. Filling in and expanding where necessary will bring it in target. I'm sold on the story, like the characterization - In other words, I seem(ed) to be clicking along on all cylinders, allowing for flexibility in polishing.

But still, while the projected release date of November 1 is gone by the way (I decided to retain a cover artist whose credentials and work I really love, and to hire a line editor for this one, so that pushes things back...) I thought a 2012 release was not out of the question. Just in time for Christmas.

And the story was heartwarming (I thought, at least).

I was pushing on with the initial polished (draft=> first finished draft=> polished draft=> final MS => OMIGOSH ICAN'TBELIEVE IFOULEDITUP SOBADLY!!!
=> final polished manuscript [friends and relatives having tied the author to a chair and taken matters into their own hands. "It's FINISHED, Diana! You CAN'T edit any more!!!"] )

I was, as I said, pushing things along, but I wasn't happy with the setting of the first chapter. Father leaving for a protracted journey, leaving eldest son in charge. Eldest son voices dissatisfaction with this state of affairs. Father gives good speech. and leaves.


The story is about the eldest son's decision to get out of there and leave his brother to run the family business. He gets killed, and his family and loved ones pick up the pieces... It actually is a bright story.


I was scowling at the first chapter, which seemed lifeless -  I sat back with a mingled groan and wail.


Start the story with the son out of the country progressing toward his death, which happens within the first chapter - second at most. Backstory can be put in there easily. THEN switch back to the threads of the younger son and the father.


Groan! A rewrite. Admittedly, it doesn't alter the true meat of the story, which kicks in around chapter three, but still...


Well... I could still retain the cover artist, I suppose...

Posted by Diana Wilder at 6:33 AM No comments:

I have been giving a lot of thought lately to what some people scornfully call 'Bodice Rippers'.  You know the sort of story I mean.  Sometimes they are called 'Historical Fiction', to the dismay of people like me who actually write historical fiction.

I do not like to use the term 'bodice ripper' because while there are two types of stories that fit that slot, the word for, or title of, the second type of 'bodice ripper' does not exist, and the first term is a little too sexual.  I will be using the term 'Historical Romance' for both in this post because I think it fits the guidelines given by Webster Dictionary for the noun 'Romance':

The books are always set against a backdrop of a period of history.  The period is not important; it fluctuates from year to year depending on what is in fashion.  Medieval history is a perennial favorite, though the Scottish Wars for Independence are in the ascendant.  Dark ages Europe is also gaining popularity.  Another dependable standby is the 'Napoleonic era' - from about 1790 through about 1816.  The American Civil War also makes an appearance.


The background research varies from nearly nonexistent to substantial.  And there may be a story line found inside the pages.  (In my opinion) what makes these stories 'bodice rippers' - or, rather, Historical Romances - is their focus, which is to titillate, to satisfy a hunger or a fancy, with the story line taking second place to that purpose.  To avoid a trip into semantics, here is Webster's list of synonyms:

These stories' descriptions are fairly similar.  The protagonists/antagonists are set forth and the basis for the story.  The dangers that lie along the path are hinted at.  You can choose to read or to pass:

The (band of heroes)  have itchy feet. Battle-hungry and tired of keeping the homestead fires burning, they are restless for action. And... action is what they get. When their homestead is attacked ... the (band of heroes) promise bloody revenge. ... Packed with epic adventure and bloody action...

“A rollicking, dangerous and often very gory gallop through the largest land empire the world has ever known.”


For Gunnar, vengeance is all that matters. He seeks the ultimate price from his enemy’s beautiful young daughter, claiming Raina as his hostage. But the proud beauty defies him at every turn, tempting him like no other. Setting out to break Raina’s glorious spirit, Gunnar instead finds himself bewitched by her goodness, her strength. Can he seize the justice he is due without losing Raina forever.

It is obvious that they are different sides of the same coin.

The covers of Historical Romances tend to hint at the items of attraction that will be delivered by the book:

There is no black and white in this life.  Some of the Historical Romances   of either type are close to excellent fiction - The ones whose covers I have shown have been written by people described as 'award-winning authors' and have received good reviews from a good many people averaging 4.5 stars.  I remember one series of romances, set in the time of the conflict between Stephen and Matilda () that had wonderful plot and excellent research.  The stories did involve men and women and their relationships, but they were secondary to the plot.

Someone, speaking against his/her notion of 'Historical 'Romance' of one sort expressed it in an interesting fashion.  This is a paraphrase:

There is the man who loves his woman and longs to see her once more before he is killed on the field of battle.  Or there is the fighter who lives for war, whose love is battle and whose mistress is his sword, who satisfies his physical urges by patronizing the whores that follow in the tail of every army.

I think both types share a distortion of history or, more accurately, the 'historical norm' of the period that they concern.  Human nature and inclination has not changed appreciably over the millennia.  Most people lived at home and interacted with their families.  They had their tiresome tasks, their moments of delight, their festivals and their tragedies.  Not everyone in the Northlands  went i-Viking.  They knew about sex - that is why we are here today - and loving relationships existed as did attachments based solely on monetary payment for physical need.  A love affair between two people or a rousing fight scene does not necessarily make a novel an 'Historical Romance'.  It all depends on the purpose and focus of the book.