A review of A Time to Change 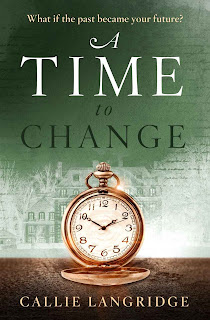 “I would rather love passionately for an hour

than benignly for a lifetime.”

Lou's life is a shambles.  Lou was supposed to run an errand, got caught up in her own business.  Time passed, her mother went to run the errand, and was killed in an accident.  And Lou blames herself for the death, the grief, the loss of energy, and the wreckage of her relationship with her brothers.  She is living with her two brothers, caught in self-blame for their mother's death.

It is close to Christmas, and the contrast between the season of celebration and the season of grief and self-blame in her heart is expressed beautifully.

At loose ends, she visits a derelict old 'stately home'. Hill House, once owned by the Mandeville family.  While roaming the wrecked stables and grounds, she meets an old man, the child of servants there, who looks at her with knowledge and says, mysteriously, 'one out, one in'.  She moves through the corridors and is suddenly transported to 1913, when the First World War was a roaring on the horizon.  She is a guest in the house, welcomed by the Mandevilles, and she is caught up in their life even as she knows that Hill House and its family will fall into ruin.

She catches threads of danger to the family, threads that she must unravel.  And she falls in love.

The story progresses very well to an ending that ties up all the loose ends, both past and present.

I will not 'give away' the ending: read the story for yourself.  It won't be hard to suspend your disbelief, and you will be happy with the ending, even though you may find yourself shedding tears.

The author did her research into the historical period.

The author writes believable characters, though the villain of the piece is very dislikeable.

The author handles what I will call 'fantastic' elements and people deftly and believably.

What is not so good:

The villain’s villainy is revealed to the heroine rather abruptly.  This really isn’t a black mark, simply a matter of taste.  Others might disagree.  As villainous as the villain was, I confess that it would have been lovely for one of the men of the Mandeville family to give him a bloody nose.

The twist(s) at the end were unexpected, but were in full accordance with the story, and surpassed my expectations about the resolution.

The story line was compelling.

The characters were believable and engaging.  The villain was also believable, and one wished, believably, to see that he is foiled.  Was he?  Read it and see.

The historic points were pretty much spot on.  The behavior of the servants and the Mandeville familyfit well with what we know of the norms of behavior during that time.  The story line did allow for some flexibility.

The fantastic elements (there weren't a lot of them) worked very well.  No 'creaking' events.

The characters, of all kinds, were true to themselves and the situations and parts that the author assigned to them.

And the ending surprised me. (I generally read the ending first.  I didn't do it this time, and it was worth it.)

But don't sit down to read it if you know you are going to have a busy day with a lot of distractions.

Posted by Diana Wilder at 6:27 AM No comments: