I am a graphic designer in a small way.  My family has always been artistic, with painters and sketchers and designers of jewelry and knitted garments.  That is not my gift, unfortunately.  I wish it was.  I took a class in watercolor and did decently for a neophyte, but the spark wasn't there.  That isn't going to stop me from practicing at some point (it's been a few years), but the urge is not there.
I discovered graphic design, though.  Taking images and arranging them harmoniously.  I bought a version of Photoshop and taught myself, and had a lot of fun along the way.  Now I take commissions and work on people's websites.
...and I design my own book covers.
It takes a while to formulate an idea into a whole.  I'm not going to post photos following my path of designing a book cover.  I will say, though, that I have redesigned the cover for Pharaoh's Son
and am posting it here.  It will take some time to be put on the listings, but it's in the works.
If you look at my posts on Kindle covers as well as the one on old and new covers, you'll see the development.  My first cover for Pharaoh's Son was a redo of the wretched one.  It wasn't bad, but I got the idea of using the colossus that inspired the story in the first place and the design took off from there.
I deleted the pyramid (it was on the back of the book for a while).  The nighttime sky made sense because the climactic scenes take place at night.  It fit.  I did make adjustments, but the cover is what is listed on my 'Kindle covers' post. 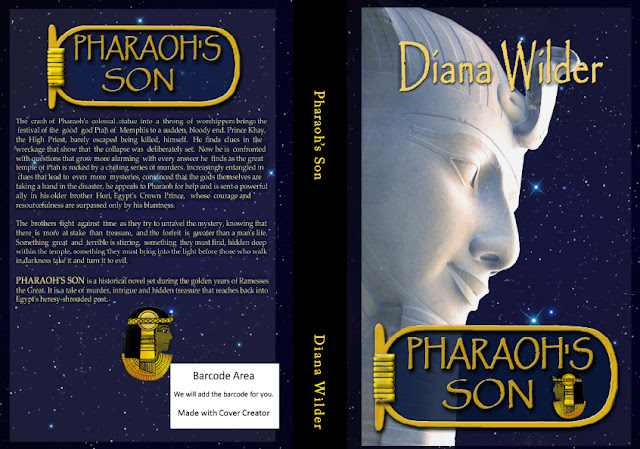 I will be working a free giveaway for Pharaoh's Son, City of Refuge and A Killing Among the Dead, and I'd been dissatisfied with my designs recently.  They were OK, but amateurish (well...  I am an amateur, after all...) and I'd had a notion...
The design incorporates two additions, a cartouche and a line drawing.  The 'Cartouche' is the oval element that contains the title and, on the front, the line drawing.  The line drawing itself is a depiction of an Egyptian prince.  The headdress is composed of a headband of gold with, on the side, the pendant element including some sort of circular stone?  Enamel?  We haven't found one of those in the round, but we have various depictions. 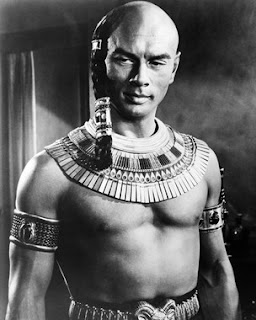 Young boys, prior to puberty, are depicted as having shaved heads and a braid on one side of their heads. It's called the 'Horus lock'.  Yul Brynner as Ramesses in The Ten Commandments, wears one of these.  Based on his behavior, Yul's character was long past puberty, and I enjoyed a good snicker, but this is a good depiction.
A mature man who was acting in the role of someone's son (or a prince) would have worn something like the headdress in the line drawing.  You'll see them shown on depictions of various pharaohs' sons assisting in storming cities and other such activities.  The cobra at the front of the line drawing is my invention to show that the wearer of this particular headdress  is 'His Royal Highness' - the Crown Prince.  In my story, other princes might wear that arrangement, but without the cobra, since they were not in the direct line of succession.
The Cartouche is on its side.  Egyptians used that feature when their text was on the long side and couldn't be fit vertically, or else when the horizontal arrangement was more satisfactory.
All in all, I like the difference.
Posted by Diana Wilder at 4:41 AM