On my laptop, currently... 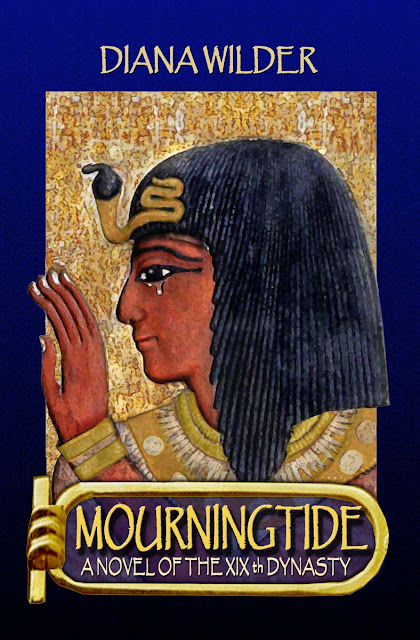 I'm finishing up the first draft of Mourningtide - fillling in the transitions (between chapters), fleshing out the love story - must mention that in a moment - adding some details to the character of Seti, the father.
His first appearance in the story is his departure for far southern Nubia, where he will be traveling beyond the big fortresses of Buhen and Semna, following the trade routes.  He says goodbye to his two sons and his chief advisors and leaves.  His second appearance is his return to Memphis some months later.  He learns of his son's death and reacts - and the story proceeds from there.

I realized I needed to flesh out his character (he is one of three main characters, and the one that has been the most challenging to handle).  I hit upon an idea for a nightmare scene where he witnesses his son's death in his dream and awakens, his mind full of the worst fears a parent can have.

Seti's been challenging, as I've said.  He's late middle age - in his 50's.  He is from a military family, nobility in the Egyptian delta, but not royalty.  He held high office for fourteen years (governor, or Vizier, of Northern Egypt as well as a general in the Royal Army) and became Crown Prince upon his father's accession to the throne by appointment.  He has been king for three years.  I picture him as a man with a good deal of subtlety, but a direct way of thinking.  He is reserved, and while he might open up to those he loves and respects, he has considerable self-control.  His grief turns his world sideways.
The love story develops quietly.  Seti is widowed, and he's a little lost, settling things in his mind, adjusting, waiting to heal.  The woman comes into his life, understands him, and gives him a chance to find his balance again.
It's late.  I should write more tomorrow.  We'll see...  Tiring work, but good.
I hope to have the first 'final' draft ready within two months...
Posted by Diana Wilder at 8:38 PM