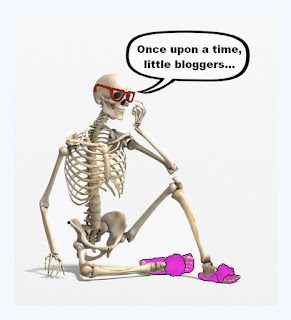 Welcome to the Bonehead Blog Hop!


This is the idea of Cherdo, who tells stories that make you laugh like a fool, the point of which are that she meanders through life being a bonehead, and it never crosses your mind (while you are laughing) that she’s about as boneheaded as a fox.

Your hosts are Cherdo, of Cherdo on the Flipside.
And me (Diana Wilder)


Our motto:
"Confession is good for the soul...it may not
be your soul, but trust me - it's good for someone's soul."


I have spent the past week plus battling a dying computer that has stumped the good folks at my local computer store, crossed swords with Windows 8, which I am convinced is a plot by Microsoft to destroy civilization and drive it mad in the process. I wish I could think of something I did during all this time to show what a dope I have been, with this whole episode, but I honestly can’t. Unless it is that I have been stupid enough to underestimate the tendency of computer-type folks to keep fiddling even after they have come out with a product that is splendid in its simplicity, easy to use, and magnificent in its capability.

…This from the person who has tweaked a book cover for the umpteenth time until my nearest and dearest have inquired, sweetly, whether I am thinking of putting my hero in a dress for the cover and spring a surprise ending on everyone a la Bruce/Caitlin Jenner.

But, truly, I have had my share of truly dopey moments.  Let me tell you of one.

Picture a lovely lake by moonlight (on the border between South Carolina and North Carolina. Lake Gaston:

…Imagine me, tanned and fit, wearing my Camp Counselor getup. Imagine the boy who filled my dreams, cute grin…


We were walking together in the moonlight, talking of things. Of what? Well… things. I don’t remember. He was so cute, and the moonlight was so lovely and I was walking with him. I mean, really, how rare is it that the object of your crush gives you even the time of day?

So, we walked along, the breeze rose and teased my hair (I had long hair back then), I could smell the pines somewhere around there, and Debussy’s Moonlight Sonata was playing in my mind along with ‘Kiss de Girl’ from The Little Mermaid.


I knew – just knew! – that he would kiss me as we went into the shoreside curve, heading back toward the cabins. A little footbridge was before me, we moved onto it, walking slowly, I looked up at him –


The world went forty directions, the earth came up and smacked me in the stomach, something seized my leg, and my face hit the dirt. I couldn’t move my one leg, and the other, making the motions of running, seemed to be doing it in a vacuum.


I levered myself to a half-raised position, wondering why my right leg was being caught and held while my left leg scrabbled in the dust and scree that covered the bridge. A pair of sneakers in front of me indicated that my escort was still there, though I found myself wondering if he, like Lot’s wife, had been turned into a pillar of salt.

In those moments of wondering what had happened and why Doofus wasn’t trying to help me when he weighed, probably, fifty pounds more than me, most of it muscle (between his ears, I was beginning to think) I realized that I had somehow managed to put my leg straight into a hole in the paving and was flat on my stomach, essentially trying to push-up myself to a sitting position with my leg waving in the air over the water (which, I did know, contained the occasional snapping turtle).


I managed to extricate myself and get to my feet. Handsome, before me, said, “Why did you do that?”

Have you seen Disney’s Beauty and the Beast, the scene where Belle watches the Beast morph into a handsome prince? Well that happened to me, but in my case the Handsome Hunk morphed into Mortimer Snerd.

I gave him The Look and walked back to my cabin alone.

Go visit Cherdo’s site and grab the links (I am still trying to figure out my new computer, including how to make the images smaller now) and then look around. You’ll laugh, think, and generally have a great time!
Posted by Diana Wilder at 6:02 AM