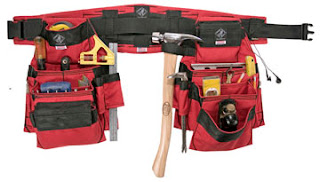 "This is a very good story," the Editor said quite a few years ago.  I was fresh out of grad school with a story I'd written and wanted to shop.  "It isn't in our line of business - " (they were a company that printed a lot of inspirational material.  They were one of the well-known companies, and if I were to name them, they would be recognized.  They had printed fiction in the past).  " - but this is too good for you to send to a Vanity Press.  Keep submitting it - and don't let yourself get discouraged.  It's tough out there, but you're good."

That was nice to know, of course, and she gave good advice, though issues arose that kept me from submitting for a number of years.  She hesitated, as though carefully considering what she wanted to say, then went on.

"Are you only working on the one story?"

"Oh no, dear.  You need to have more than one underway.  Otherwise, when you finish your current work, you will be knocked sideways.  Grieving, actually, and there will be nothing to distract you. and you'll be lost."

Well, that was nice of her, I thought.  But it sounded strange.  I was, as I said, fresh out of grad school, and I knew everything (just ask me at that time).  I didn't give it another thought until I finished my story, finally and for all.

She was right.  I was lost, at loose ends, missing my characters, following them, forming them, making sense of my ideas and getting acquainted with them.  Seeing where they were going and helping them get there, polishing their descriptions and speech, making them as wonderful as I could (Reveling in polishing, I'd call it now).  And when the last word was done, the last paragraph polished, there was nothing more to write, the story was told - 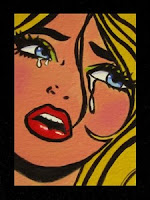 I was empty.  And, as she said, I was grieving.

I remember that month or so.  I wandered around, doing my bread and butter stuff, riding the train into the city (1 ½ hours daily in which to jot and polish and daydream - gosh, I miss it!), walking through a season of rain (the sun was, actually, shining) and wondering what, oh what I was going to do.  Grieving, she said.  What?  These weren't real characters, for heaven's sake!  I mean, I made them up out of my head.  Didn't I?  (Did I?)

Ultimately, I had another project underway, but it took a while.  I was ready this time.  I'd had an idea for another story, and I wrote up some notes about it - character thoughts, notions on where it was going - what I call 'blips' now.  I housed them in a notebook.


Be careful what you start.  I am a pack-rat.  I started notebooks for everything I was working 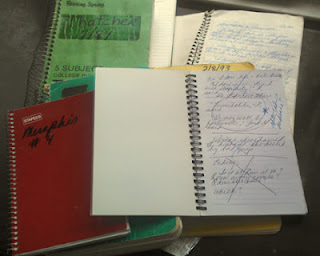 Three ring binders didn't work, even when I was in my briefcase-carrying mode because (1) they were cumbersome even with a shoulder strap briefcase, and
(2) someone apparently laid a curse on me at birth: 'All her three ring binders will end up with one bent half-ring, which will cause her manuscript pages to jump off the ring and tear'.
It is a dreadful curse, and if you combine that with my dislike of misaligned punched holes, three ring binders, even the expensive ones that hold The Decline and Fall of the , are ruled out.  Marble notebooks are nice, but if you muff an entry, it is a  bit of a production to tear out the offending page.  If you do it too well, the corresponding page on the other side of the stitching will cast loose its moorings, and if you do not, there is a rather odd-looking flap of paper left.(Warning: the spirals in spiral-bound notebooks end up squashed and distorted and will also foul up your paper.) 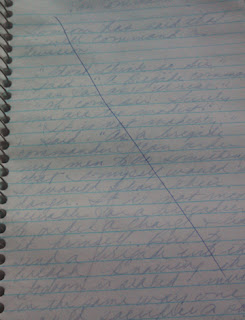 This leaves me with good old ball-point pens, preferably blue.

Over the years I have developed a good system: 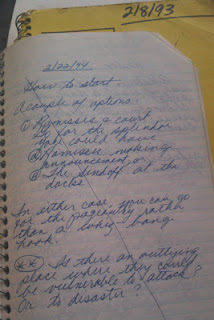 When you have an idea, jot it down.  If it seems to have possibilities, jot it in a notebook.  (Some kind of minor ideas are jotted in separate sections of three-part notebooks.

When you transcribe a page, mark it.  I draw a diagonal line across it.  If the whole page is transcribed, cut the upper corner off.

Never throw them away.  They may be worth something in five hundred years.  On the other hand, I myself won't be worth much by then.  Sigh.

Still, it's another tool writers can use.  (And it beats paper towels - see THIS POST...) 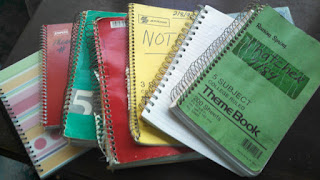