In The Works - Lord of the Two Lands 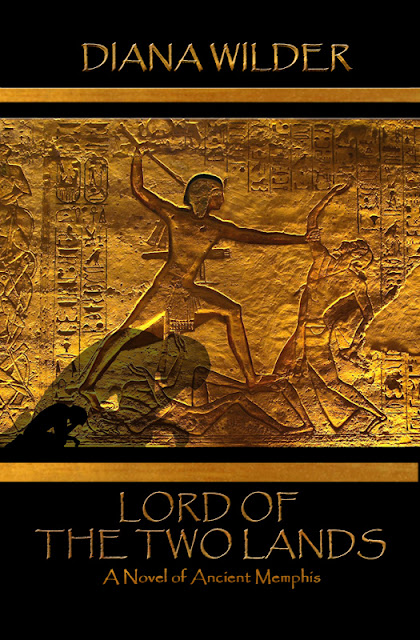 This is from a story with the tentative title Lord of the Two Lands.  It takes place two hundred years after Pharaoh's Son.  I had a strong idea of a character (years ago) and jotted down some things.  I had an idea, suddenly, for a scene, wrote it (or risk forgetting it) and the story has taken off.  Alas, it is on 'the back burner' because I must finish Mourningtide, which is going well.  But still...  It's delightful to know that the springs have not run dry.

This takes place after a battle.  The king has been captured by rebels, who are holding him in a courtyard.  Herihor, who is to all intents and purposes the de facto  ruler of southern Egypt, has just arrived at the end of the fighting.  He has  found Pharaoh where he is being held.

A torch lay in a shallow pottery bowl, spilling light across the wall's carved relief: Pharaoh lunged forward, his fist clenched on his foe's upraised arm, the swing of his war mace caught at the moment before it descended. Movement - emotion: Pharaoh triumphant. It was magnificent, vibrant, awe-inspiring, from the king's jutting jaw to the despairing faces of his foes. The dynamic thrust of the leg, driving into the ground, brought his eyes down in a diagonal to a figure at the carving's feet.

A man stood half-collapsed against the wall, his shoulder against it, his lowered head turned toward it, catching the lingering warmth of the stone in the fading day. As Herihor watched, the man pushed away, staggering a little, and looked up at the carving.


The thought came unbidden: A flame cast by a shadow.


He had made some slight noise. The man glanced over his shoulder and then turned to face him with raised head. His hands and arms were bound behind him, wrist and elbow. They had not been gentle with the ropes. He was pale with exhaustion, blood was caked in his hair and sweat made lighter streaks in his dusty face, but the black eyes that traveled scornfully from Herihor's feet to his face were as sharp as Herihor remembered. "You, too," he said.


The contempt in his voice made Herihor wince as he moved forward. "Sire-"


Pharaoh frowned. "Will you spare my troops?" he asked.


Herihor stared. Blood was trailing from the side of the man's mouth and he saw the dark smudge of a bruise at the side of his face.


Pharaoh tried to shake the hair from his eyes. "I am defeated: I admit it. How can I not? Do with me as it pleases you. My only request is this: those soldiers that fought for me, those cities and temples that assisted me, did so out of loyalty to their king. I beg you: do not fault them or punish them when you set up your--your dynasty. They will love you and yours all the more for that."


The gallant generosity of that speech made Herihor pause and look down. He drew his dagger after a moment and stepped forward.

Pharaoh watched the knife leave its sheath. He lifted his chin and faced Herihor more fully.