An Interview with Rowena Tulley

﻿
I first 'met' Rowena Tulley a while back when she emailed me a question about one of my books.  I
did not know she was a writer at that time.  It was only later that I stumbled across her series of - well, while they are 'Science Fiction', they are set in a realistic universe that is a logical extension of the one we live in today.  No 'Ta-DAH!!!' moments, rather a lived-in, exciting extension of this world.

We 'Chatted' quite a bit, I reviewed one of the books (the first) in her series, and am set to read and review some more.  I thought that her enjoyable outlook and insights would probably entertain those who go by, so here she is:

1.  How did you get started writing?


It began in the mid-nineties.  I was getting discouraged with science fiction at that time because there was very little stuff being written that interested me.  In addition, the shelves were filled with Star Trek and Star Wars offshoot stories.  I made an offhand remark to a girl friend at work that I could write better material, and she said "Well, shut up and do it."  Best advice I ever got. 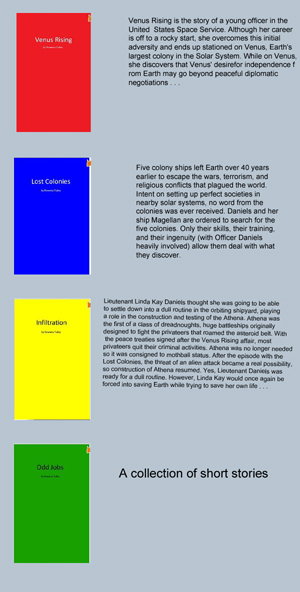 2.  One thing about your series that interests me (apart from the human angle – I've MET these people! – is the matter-of-fact way things are presented.  As an example, travel to the planet Venus is described as swift – it only takes a few months.  That echoes the time it took to travel from to by wagon.  Is this deliberate?  Logical?  What lies behind the 'lived-in' nature of your work?


I deliberately started with what will probably be the first generation of space propulsion—ion drive, using a slow build-up of acceleration, followed by a long, slow deceleration, finally braking into orbit at the destination.  Initial exploration of the solar system will be very slow, with trips lasting months or even years.  In later books, I have introduced gravitic drive to speed things up.  For interstellar travel, I start off the series with faster-than-light, or FTL drive.  In later books, I introduce sub-zero physics travel, also to speed things up.  As for the method of presentation, I want readers to think of space travel as commonplace, as well as the colonization of the planets in our solar system, and the gadgets of the future.  In other words, the future is the living present in these books, so they should be discussed in a matter-of-fact manner.


All three!  It's a hobby, in the sense that I can create stuff that people buy and hopefully enjoy.  It's a pleasant distraction, in the sense that after work, I can come home and work on my hobby (one of many, actually).  Finally, it's also a job in the sense that proofreading and editing is hard work.  As much technical writing/proofing/editing as I've done in the past (and still do), I'm amazed at how much harder it is to do the same thing to a novel.  The reason?  It's difficult to ignore the story while looking at the mechanics of grammar, spelling, and sentence structure.

4.  Your heroine is in the Navy.  It seems to be an offshoot of the Navy we know now.  You seem comfortable with it.  Dare I ask why?


Many science fiction authors tend to choose either the Navy or the Air Force as the service branch for military travel in space.  Because the distances traveled are huge and the travel time long, I believe large spacecraft of the future will be run like ships, so the Navy seems to be the logical choice to me.  However, space travel is different enough to warrant a separate organization, so I decided to create the United States Space Service.  It is part of the Navy much like the Marine Corps, but separate enough to have its own distinctive Academy.  It's not that any of this is unique.  Many science fiction books, TV series, and movies use similar logic.


5.  I understand there's been criticism of the lack of a cover image.  Why are your covers the way they are?  And, since they are special for their very simplicity, do you have anything else in the works?


I'm aware of the criticism, but there is a method to my madness.  How many science fiction book covers do you see with a big-chested, scantily-clad female holding a ray gun, a menacing alien, a space ship, a star, a planet, or a combination of all of these?  If you approach cover art as advertising, then the idea is to make your product stand out from the crowd.  In a sea of half-naked women with ray guns, a solid cover stands out, particularly when the potential buyer uses a color device like a Kindle Fire, iPad, or iPhone.  Ultimately, any book is about the story inside.  Looking ahead to the next question, I have just enough time during the week to put all my effort into the story.  Couple that with my laziness and utter lack of artistic talent, I'll stick with writing and leave cover art to the pros.


6.  If you're like many of the writers I know, you do something else to put bread on the table, at least for the moment.  That takes a large chunk out of the day.  How do you squeeze writing time in?


Typically, I can squeeze a couple of hours in after I get home from work, and before I start dinner.  However, some days I'm so tired, I just come home and collapse on the couch.  My largest chunks of solid, quality writing time are usually Saturday and Sunday mornings, before the rest of the household wakes up.  Once the noise starts, it gets harder and harder to think.  I bet if I could be alone on a desert isle for a couple of weeks, I could write an entire book!  Retiring this summer would give me tons of free time, but our oldest daughter is in college, so the tuition and other costs suck the money out of our savings account almost as fast as we can put it in.  My advice to other writers?  Don't quit your day job!  You'll find the time somehow.


7.  A word utterly escapes you.  You know what you want and it is not popping into your head.  The perfect word - AWOL!  What do you do?


I do something fun that distracts my mind, such as playing a computer game, watching a DVD, or cooking.  Heck, I might even read something!  An adult beverage or two also helps.  However, sometimes a word, sentence, or plot idea pops up in my mind in the middle of the night, so I wake up and write it down—yes, I keep a note pad by the bed.


8.  People like to read books that interest and entertain them.  I have noticed, though, that an interesting and entertaining author also gets a following.  What is there about you that people might like to follow?  Don't be shy.


Aw, you made me blush . . .  I like to think of readers as following the character or story line, not the author.  I do understand that once an author gets a reputation for good characters and stories, readers will buy the book just because of the name on the cover (not the cover art!).  My goal is modest—to write books people want to read, not to become the next J.K. Rowling.  If by some chance a miracle does occur, I'll invite you and J.K. to my yacht for lunch . . .

9.  Speaking seriously about the craft of writing, what tools or procedures do you consider absolutely essential?

A laptop computer (it's portable, and the battery functions as an uninterruptable power supply)


A non-electronic dictionary and thesaurus (it's retro, but it works for me)


Pads of paper, post-its, and pens (for jotting down ideas when the laptop is not around)


Peace and quiet (also self explanatory)


Read lots of books about writing.  While every writer does things differently, you'll discover things in common that the majority of writers do.  You may also find a process that a particular writer uses that fits your personality.  For example, one author in particular recommends writing one and only one book at a time.  I pretty much do that, but I will use a note pad to write ideas down for future books or short stories.


Keep at least one pad and pen with you at all times, day and night


Use a system for keeping track of book versions.  I use a letter revision system while writing the book, and a number system while editing the completed book.  For example, "Juggernaut" started at Rev A, and got all the way up to Rev N during the writing of the story.  Rev N then became Rev 0 (zero), and the subsequent proofreading and editing sessions got the book up to Rev 4 before publishing.  The latest revision (letter or number) is always the one you are currently working on.


Save early and often.  Save every revision of your book on multiple DVDs, and keep them in separate locations (at least one not being in your home).  Save and copy after every writing session, no matter how short.


Use Amazon's recommended format and publishing procedures if you are using Kindle Direct Publishing.  They put out free e-books on the subject, so you have no excuses!


Have other people review your work (and don't forget to thank them in the "Acknowledgements" section of your book).  It's surprising how much your innate knowledge of the story keeps you from passing needed information on to the reader.  This is related to the old adage "familiarity breeds contempt."  In addition, make sure these reviewers are not close relatives.  My mother will look at my grocery list and tell me how great my writing is.


Do the last proofreading/editing review on your Kindle (or whatever e-book reader you use).  This way, you'll view your book just as your customers would.  You can also use the Kindle Previewer on your computer.  I also discovered that reviewing your book with different margins and a different font makes previously hidden errors jump off the page at you (yes, I'm learning things as I go).  There are tons of books out there on other proofreading and editing techniques, so read them.


When doing the actual creative part of writing, don't worry so much about spelling or grammar as much as getting your ideas down on paper—er, in the computer.


I'm intrigued by the Ellen Nichols character in my short story "Light Duty".  I'm thinking of writing a mystery with her as a younger woman, at the beginning of her career with the National Intelligence Agency.  In the meanwhile, I have plans for two more books in the Linda Kay Daniels adventure series.


OK, we have an open forum here: what would you like to say?
Thanks for the interview!  Your questions made me step back and think consciously about what I've been doing all this time.