Do Fabulous Writers Make You Nervous?

In keeping with IWSG day, I am happy to host Helen Hollick, writer of engrossing historical fiction, luscious series set in far ago times and fascinating places.  Her creativity is only matched by her encouragement and support of other writers.  She is the sort of person who makes insecure folks nervous.

...and tomorrow she is releasing the latest book in her swashbuckling seafaring SeaWitch series!  I am happy to host her here - and am looking forward to reviewing On The Account.  (You see, I have a Reader's Copy and I am deep into it.  You will enjoy it, too!)

The Anticipation Of The New Book

You would think that after more than twenty years as a published author and with (quick count-up) eleven books behind me and two more ‘on the boil’, that I would be confident about my next title’s release.

I am as excited about the fifth adventure in my Sea Witch Voyages as when the very first book was published. That one was The Kingmaking, the first of my Pendragon’s Banner Trilogy. But I am also just as nervous.

In the early eighties I had achieved a small success with a children’s ‘keep yourself safe’ book called Come and Tell Me (now, alas, out of print) and was accepted for publication by William Heinemann a week after my 40 th birthday in 1993. What turned out to be the first two books in the trilogy had taken me over ten years to write; I had not expected anyone to actually want to publish my scribblings. I did not think I was clever enough to be an author. I had an ordinary secondary school education, which in the 60’s meant a second class education. I did, however, have a very good English teacher, a deep and immense love of books and reading – and, when I discovered it by accident, a passion for history.

History at school had been a very low priority because it was so boring. In fact, I used to do my geography homework during the history lesson. I left school and went to work as an assistant in the local library in the London suburb of Chingford. There, I rediscovered Rosemary Sutcliff and found Mary Stewart’s Crystal Cave and Hollow Hills. She had an author’s note which mentioned that if King Arthur had existed he would have been alive around the end of Roman Britain, circa 440 AD. That interested me. I started researching (hooray for library books!) and then, dissatisfied with novels about King Arthur and in particular his other half, Guinevere, I decided to write my own version. My trilogy is a ‘back to basics’ story, using the earlier Welsh legends, not the later Medieval tales. There is no Lancelot, round table, Holy Grail or Merlin.

Instead, Arthur is a warts an’ all warlord who has to fight hard to gain his kingdom, and fight even harder to keep it – and Gwenhwyfar as I call her. The trilogy led to my next two novels about events that led to the 1066 Battle of Hastings, Harold The King (titled I Am The Chosen King in the US) and A Hollow Crown (titled The Forever Queen in the US). 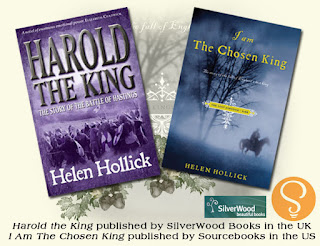 A lot of water has flowed under the bridge between then and now. I was simultaneously dropped by Heinemann and my (ex) agent so went into Indie publishing instead, (sharp learning curve there, I can tell you!) Subsequently I was picked up by North American publisher, Sourcebooks, I’m about to have several of my books translated into Turkish, Italian and German, and I have been commissioned to write a mainstream non-fiction book about pirates. I guess I could say I’ve been there, done that, got the t-shirt and written, not just read, the book. (Yes, done that as well: Discovering the Diamond is a modest little book giving a few useful tips to new and novice writers.)

So here I am on the eve of my next book setting sail and I am still biting my fingernails and worrying.

Of course I want the book, this latest adventure of my charmer of an ex-pirate Jesamiah Acorne, to do well. I’ve worked hard on this nautical adventure series that is a cross between Hornblower, Patrick O’Brian’s books, and the Pirates of the Caribbean movie, with a splash of James Bond, a dash of Bernard Cornwell’s Richard Sharpe and a smattering of Indiana Jones. 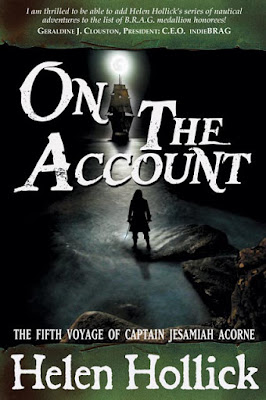 Of course I want sales, of course I want it to scramble up to somewhere near the top of the sales list – even if it is only on Amazon, where no one actually knows how the ranking works anyway.

But none of these are my top concern. My greatest worry is not letting my readers down.  For the past few weeks I have been inundated (well had a few…) emails from followers wanting to know when On The Account will be available for pre-order/sale. ‘Soon’ has been my cheerful answer: 7 th July is the official date. It has been wonderful receiving these supportive emails as they show there are people out there eager to sail-away on the Sea Witch with Captain Acorne for another adventure. They have been patiently waiting since Ripples In The Sand, Voyage Four, which left Jesamiah arrested for smuggling contraband, his mistress in labour, and his ship, Sea Witch aground on England’s North Devon coast. But trouble follows Jesamiah like a ship’s wake: in this next episode he has to find a missing box (valuable), and a boy who has also gone astray (possibly with the box). He would like to be rid of a mysterious Night-Walker love-rival (who is annoying him) while dealing with a boatload of Barbary Pirates who have kidnapped his wife, Tiola… (Oh, and he is in trouble with her as well.) Meanwhile, Tiola herself has her own battle to fight – keeping herself and Jesamiah alive.

That’s the gist of the plot, but will my eager readers enjoy the adventure?

That is my biggest worry. I don’t want to let them down.