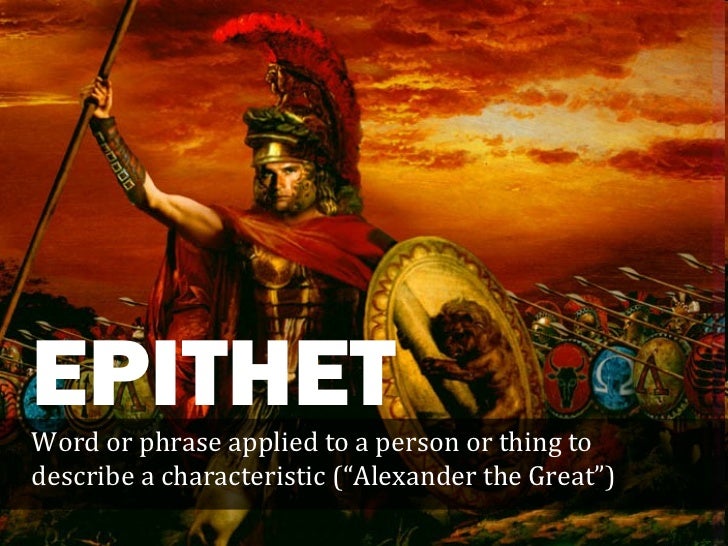 Today I am speaking of epithets.  Years ago I had thought it a word synonymous with 'insult'.  In fact, you read in books of people 'hurling epithets'.  But the definition is a short nickname, often using an adjective or descriptive phrase, which is attached to the person's name.  (Read on regarding the insult issue)

Epithet is defined as a short, poetic nickname--often in the form of an adjective or adjectival phrase--attached to the normal name.  (Richard the Lionheart or Duke John the Good.)
﻿
﻿﻿You will often see this in poetry when the poet needs a few more syllables to make his lines scan properly.  Let's say he is short four syllables while writing about one or another of the Erics that you might encounter while dealing with Vikings.  Eric wore glasses (obviously a warrior ahead of his time) so the poet could tack on 'The Short-Sighted' and fill the necessary syllables.   ﻿﻿

The Homeric Epithet (found, not surprisingly, in Homer) has Fleet-Footed Achilles, Menelaus of the Loud War-Cry, Hektor of the Glancing Helmet, Sneaky-Minded Odysseus.  (Some of these names may be my own invention...)
﻿﻿

The use of the epithet comes into its own with heads of state.  We have Edward Longshanks (Edward I of England) who was, himself, the son of John Lackland (John I, Richard the Lionheart's youngest brother).

In history we have Ethelred the Unready, Berthe aux Grands Pieds (Big-foot Bertha), Pepin the Short, Louis (XIV) the Sun-King, The Grandmother of Europe (Queen Victoria).  My favorite of all of them, however, is the nickname for the Prince Regent, the man who became George IV: "The Prince of Whales".

Wikipedia has a fascinating listing of epithets applied to rulers Here.
It is worth a visit.
Click here to Go to the A to Z Challenge
Posted by Diana Wilder at 12:30 AM

Email ThisBlogThis!Share to TwitterShare to FacebookShare to Pinterest
Labels: A to Z 2015